Disclaimer:  this post is sponsored by Blue Diamond Almonds.

Ahhhh!! It’s officially here:  MARATHON WEEK! Well, the first one of 2015. I’ll go through it all again later this year (for which I am super freaking pumped). With just days until 26.2, I wanted to share five things I’m really focusing on to prepare myself mentally and physically. The training itself is, for all intents and purposes, behind me. So, what all does that entail?

Meditation. In recent months, I’ve become a big believer in the power of meditation. In the days before the race, I’m focusing my intentions on calming my anxiety about the race. Although it’s still a few days out, I’m feeling surprisingly calm about the whole thing. I truly believe that taking 5-10 minutes every day to meditate is a big reason why. That calmness may change, but it’s a really great place to be.

I’m visualizing a successful race, which for this time around, simply means crossing the finish line with no major calamities along the way. Much like the last few races, my goal for this one is ultimately to have fun and enjoy the experience. At this point, there’s little else I can do to get my body ready for the miles. Although a case of piriformis syndrome somewhat derailed my training over the last six or so weeks, I have to trust in the training I did fit in and believe that I will cross that finish line.

Hydration. As I DNFed my last marathon attempt (most likely) due to dehydration, this is something I am being extra aware of this week. I’m using Nuun at least once a day to boost my electrolytes. The cherry limeade tastes awesome, so it’s an added bonus. I need to be even more diligent in my hydration on Friday. Time on the road to the race may lead me to drink less water than I normally would. I’m also avoiding alcohol, at least until dinner the night before. While that seems counterintuitive, before my last three races I’ve had a drink and either PRed or was seconds away from doing so. My guess is that it helps calm my nerves just enough.

Eating healthy. My nutrition lately has been far from spectacular, to put it lightly. This week, I’m focusing on eating really well: lots of fruits and vegetables, some carb loading (but not an excuse to go crazy and eat ALL the bagels), and high protein foods for when I’m feeling snacky in the afternoon. Blue Diamond almonds are my favorite go-to option for this, especially the sea salt, as sodium is important in distance running. Fortunately, the forecast is calling for milder temperatures, but I know that over the course of the five or so hours of running, I’ll lose a lot of sodium through sweat. 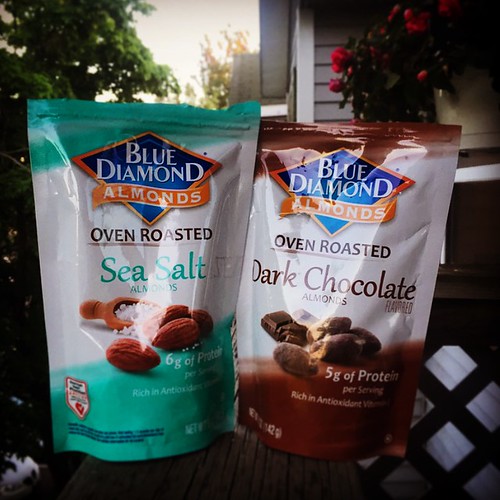 Sleep, sleep, and more sleep. Our resting hours are when our bodies work their recovery magic. I know I’m not going to run my best race if I’m exhausted. My nerves and excitement on Friday night likely won’t bode well for a good night’s sleep. The more nights I can get 8-9 hours of sleep this week, the better.

Working out the muscles. I’ve been spending a lot of quality time with my foam roller and Tiger Tail for self-myofascial release on my IT bands and piriformis, both of the muscles that I’ve had issues with in the last year. I’m doing the YOGAmazing 20 minute yoga for runners flow each evening, and taking at least one, if not two, classes at the studio. I’ve been icing the trouble areas for about 15-20 minutes every night.

I also have some prescription anti-inflammatory medication that I’m taking once or twice a day. There is mixed research on using NSAIDs before and during races. The majority seems to lie in the “don’t do it” camp. I would rather err on the side of caution, so I will only take those for the early part of the week. While I’m hoping there’s no pain during the race, if there is, I don’t want to mask it and potentially make things worse in the long run.

Fellow runners, what do you focus on in the days leading up to a big race?

This site uses Akismet to reduce spam. Learn how your comment data is processed.

Mindy Nienhouse is a certified holistic health coach and personal trainer with a mission for helping clients lose weight and learn to live their best life.

Soaking up the sun and living his best life. 😻

I spent a few hours with some of the fam yesterday

Two years ago, I had the BEST Fourth of July when