This was the fourth year I’ve run this particular race (and seventh time total for the River Bank Run – previous, I’ve run the 5k once and the 10k twice). Still, my anxiety was sky-high for most of the week. Between the hip issues plaguing me for the previous several weeks to the forecast (warm and rainy (read: humid!) with a chance of thunderstorms), I was a bundle of nerves. The weather was out of my hands, so I tried to focus on the things I could control: hydrating, sleep, good nutrition, and things like that.

I think in part because I have run this course several times now (not to mention all the training miles on these roads), a lot of it was kind of a blur this year, so rather than recounting mile by mile, there are certain things that vividly stand out.

I wore the top from my tri kit, my favorite running shorts from Old Navy Active, a hat from the Chicago Rock ‘n’ Roll Half, Mizuno shoes, and RWT branded socks. I forgot to leave my glasses in my car, so unfortunately ended up running with those which I knew wasn’t going to end well. Before I hit two miles, they were fogged up pretty heavily and I ended up carrying them the rest of the race. I knew it was bad when I contemplated leaving them somewhere in the middle of the race with hopes they’d still be there when I went back for them later in the day. Glasses are expensive, so I didn’t do that. The tri top kept rolling up in the back and I spent a lot of time in the first 5k messing with that. 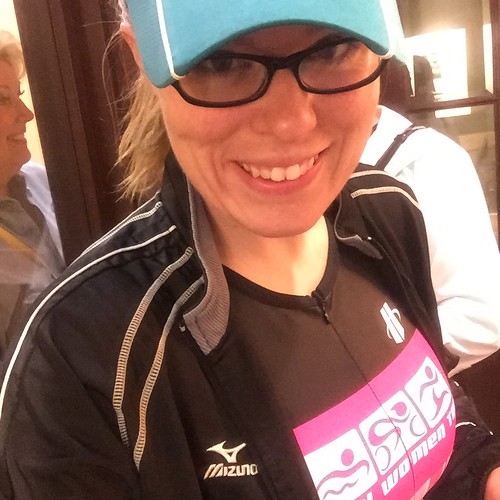 Thankful, the weather could have been so much worse, but it was definitely not the most ideal conditions I’ve ever raced in! I woke up to pouring rain around 4am. It had let up a little by 6am, but was still coming down pretty hard. I turned on the local news to see what the status of the race was, and things were good to go since there were no thunderstorms as part of the storm system.

The 25k race started at 8:30am, and I was already pretty wet by the time I crossed the starting line. Although the rain did eventually let up, it was still drizzling for the majority of the time I was running. It was warm and muggy the entire time, which made breathing a bit more of a struggle. Around mile 12, we had a nice river to cross where the road had flooded! The majority of runners went around to either side. I went to the left because there were less people going that way and still ended up with wet feet! 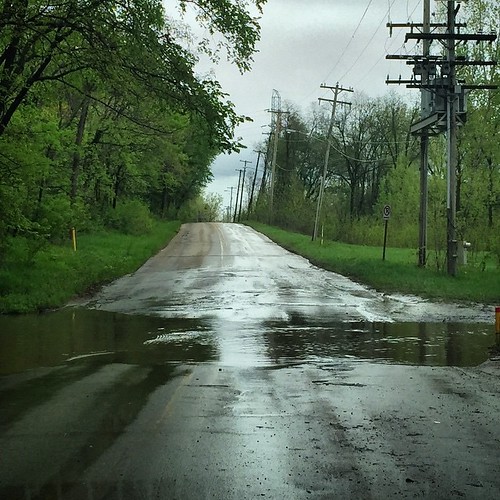 The night before the race, I made it my number one goal to just have fun out there. I knew the weather was going to be miserable, I didn’t know how my body would hold up, and it’s just an all-around challenging course in general. I gave myself the freedom to not worry about maintaining a particular pace to finish in a certain time. Just have FUN. And, that’s what I did for the most part. By the last 5k or so, I just wanted to be done, but beyond that, I did have a lot of fun! I revamped my playlist at the last minute to add some of my favorite happiness-inducing songs, I sang along with the bands (perhaps to the dismay of the runners around me), I splashed in a few puddles when the course wasn’t congested.

One of my favorite things about this race is the people, especially the volunteers and spectators! The weather kept some of the spectators away compared to previous years, but there was still a good crowd. The wonderful volunteers were still out there with smiles and words of encouragement. The people watching among the other runners is always amazing, too. There was one woman who was pushing herself along on one leg with the aid of a scooter. I later learned she was not only a two-time cancer survivor, but had a fractured heel. Another guy ran carrying a Bible in the air. Most notably, of course, was the full-on dinosaur costume, tail and all, that passed me around the 7 mile mark.

As much as I told myself that my pace and finishing time didn’t matter, let’s be honest. It does. I felt excited when I realized in the first few miles that I was running well and maintaining a good pace. Historically, that’s always been true for me in this race. I can hold my own for the first 10k or so, but by the halfway point, things start to unravel. Knowing that, I just tried to build up some time in that first 10k when the course is nice and flat. I was pleasantly surprised that the few miles of rolling hills didn’t destroy me this year. They weren’t easy, but I didn’t feel nearly as defeated which was so encouraging! Still, that second half of the course is a struggle and I knew my pace was slowing down considerably.

Here’s how my mile splits broke down:

This race clearly marked some slower splits, but given how little I’ve run lately due to my hip issues, I was honestly pleased, especially given the weather conditions (pretty much everyone I talked to struggled out there) and the tough course, I was happy. What made me most overjoyed is that I finally earned the sub-3 hour finish I have fought for every year I’ve run this race. In 2013, I missed that goal by 36 seconds, but this year, it happened and I got a nice little PR out of the deal. When I crossed the finish line and saw the time on my Garmin, I got really emotional and teared up.

The last few years, the medal for this race has been the same. While I treasure the one I earned the first year, they got a little boring after that point. They’re still special but the excitement just wasn’t quite the same. I honestly wasn’t planning on running the 25k this year, but when they revealed the new medal, I was 100% in because it’s so pretty! Then, the partnership with the Gazelle Girl Half Marathon came up – runners who ran both the half and the 25k would earn a special “double down” medal. More bling? Yes, please. 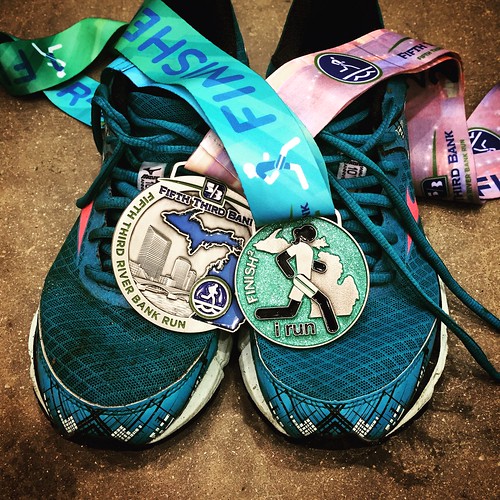 All in all, I was over the moon pleased with how this race went. Yes, the weather was crap, but the mentality of running for fun was probably my saving grace. I was happy that my hip and IT band didn’t bother me. I’m still amazed and happy with the finishing time I managed! Another 25k is in the books, my friends! Next stop: BAYSHORE MARATHON! Holy crap.

This site uses Akismet to reduce spam. Learn how your comment data is processed.

Mindy Nienhouse is a certified holistic health coach and personal trainer with a mission for helping clients lose weight and learn to live their best life.

Make sure this account has posts available on instagram.com.